Margaret (Peg) Van Patten is Communications Director of Connecticut Sea Grant at the University of Connecticut, where she has worked for 27 years. She earned her Master’s degree in Marine Sciences at the University of Connecticut in 1992, studying the reproduction of Laminaria saccharina (sugar kelp) in the western North Atlantic Ocean under the mentorship of Professor Charles Yarish.  Prior to that, Peg earned a Bachelor’s degree in Environmental Studies at Connecticut College in 1987, where she graduated cum laude and was admitted to Phi Beta Kappa society. Peg is the author of award-winning publications including Seaweeds of Long Island Sound, Sound Facts” and Phytoplankton of Long Island Sound. She is editor of Wrack Lines magazine, published by Sea Grant since 1999. Peg currently serves as regional representative for the Northeast Sea Grant Network, representing seven university programs. She is on the NOAA Sea Grant Coastal Storm Awareness Program communications team and on the editorial board of the NOAA Climate.gov website. Peg has taught Public Relations Writing at UConn and many other courses for other higher education institutions as an adjunct instructor. Peg has coordinated volunteer efforts such as the Connecticut Coastal Cleanup (1987-2001) and the NOAA Phytoplankton Monitoring Network in Connecticut. Peg is a lifelong Connecticut resident, proud mother of a daughter and a son, and grandmother of three girls. In her off time, she figure skates competitively and is a member of the Northeast Algal Society and the Norwich Figure Skating Club. Education: University of Connecticut, M.S. 1992 (Marine Sciences); Connecticut College, B.A., cum laude, (environmental studies), 1987. Mohegan Community College, A.A. (liberal arts), 1984. Salutatorian and National Honor Society, Wheeler High School, 1968. Also certificate for Communicating Science Effectively, Albany Law School, 1998. 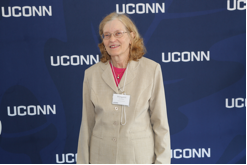