By Rebecca French, Director of Community Engagement CIRCA and Maya Thompson CIRCA 2015-2016 Undergraduate Intern

CIRCA is often asked, “What number should I be using for sea level rise for planning in my town?” There are many sea level rise planning tools available that are appropriate for education and awareness-raising and first-pass planning, but there also many factors that limit the accuracy of these planning tools for decisions at the local infrastructure scale. These factors are discussed in a previous blog post, “Interactive Mapping Tools for Sea Level Rise and Storms: A Review and User Guide.” In this post, we are discussing what the state of Connecticut currently has on the policy books about sea level rise.

At this point, the State’s answer to “what’s the number?” is a reference in PA 13-179, An Act Concerning the Permitting of Certain Coastal Structures by the Department of Energy and Environmental Protection. The Act references the NOAA CPO-1 report published in December 2012 entitled, “Global Sea Level Rise Scenarios for the United States National Climate Assessment.” The Act requires that the state plan of conservation and development, municipal plans of conservation and development, the civil preparedness plan and program, and the municipal evacuation or hazard mitigation plans must “consider” the sea level change scenarios from the NOAA report. In the plan of conservation and development, OPM must consider the risks from increased coastal erosion from sea level changes on infrastructure and natural resources and make recommendations for siting future infrastructure and development that minimizes use of erosion-prone areas. The current state plan of conservation and development expires in the year 2018, therefore, these changes will impact the revision of for the 2019-2023 plan. PA 13-179 further defined a “rise in sea level” under the coastal management act as the average of the most recent equivalent per decade rise according to NOAA’s Bridgeport and New London tide gauges. PA 13-179 also charged the University of Connecticut (UCONN) Department of Marine Science to update the NOAA projections every 10 years. In the next year, the Connecticut Institute for Resilience and Climate Adaptation (CIRCA) will determine sea level rise statistics for the state of Connecticut. 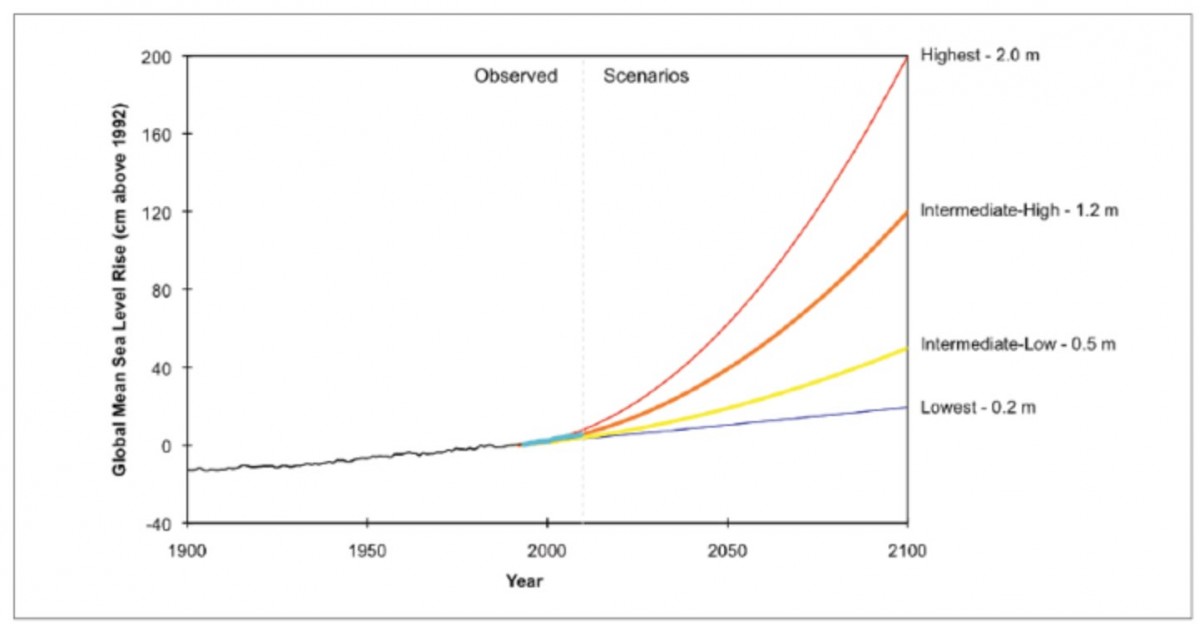 Sea level rise is due to a number of factors summarized in Figure 2. The most significant factors determining sea level rise in recent decades are ocean warming and ice sheet loss. As the ocean warms, the water expands. Ice sheet loss increases sea level through melting and contributing water as well as discharge of ice into the sea. Both of these factors are related to the rise in global temperatures and depend on the rate that the planet heats up in the future. These factors contribute to why there is a range of values reported by NOAA. The highest value is calculated based on the highest global warming projections and the maximum possible glacier and ice sheet loss by the end of the century. The NOAA report recommends that this highest scenario be used “where there is little tolerance for risk (e.g. new infrastructure with a long anticipated life cycle such as a power plant.)

Figure 2. This figures summarizes the factors that contribute to sea level change, both on land and in the sea. Source: IPCC (2001)

Regulations in the Floodplain for Connecticut

The policies described above are not currently used to regulate building in the floodplain. Most municipalities will be more familiar with making decisions about siting infrastructure based upon the FEMA Flood Insurance Rate Maps (FIRMs). When applying to the Department of Energy and Environmental Protection for a Flood Management Certificate for a critical activity, such as the “construction of schools, hospitals, residential structures, and the storage of hazardous or contaminated materials in a floodplain” one must know the 500-year base flood elevation (BFE). According to FEMA, the base flood elevation is the “computed elevation to which floodwater is anticipate to rise during the base flood.” The base flood elevation must therefore take into account wave crests as well as still water heights during an event. In Connecticut there is no FIRM with a wave crest BFE for the 500-year floodplain, therefore, the DEEP recommends calculating the 500-year BFE as the 100-year BFE multiplied by 1.25.

FEMA’s Flood Insurance Rate Maps do not incorporate future projections of sea level rise. They only use historical data to determine floodplains.

“Summary of PA 13-179—sSB 1012: An Act Concerning The Permitting of Certain Coastal Structures By The Department of Energy and Environmental Protection” Last modified June 21, 2016.

Connecticut Department of Energy and Environmental Protection. “How to calculate the 500 year Flood Elevation in a FEMA Designated Coastal Flood Hazard Area For the Purposes of Obtaining a Flood Management Certification from DEEP”. Last modified November 21, 2015.