Coastal adaptation and resilience planning at the municipal scale presents multiple challenges including concerns with the tax base, lack of decision support tools, and gaps in valuing urban ecosystem services. A project team consisting of Yale researchers, the South Central Regional Council of Governance (SCRCOG) staff, and municipal officials applied adaptation strategies to projects at Old Field Creek in West Haven and Cosey Beach in East Haven.  These two projects build on past efforts of the Southern Connecticut Regional Framework for Coastal Resilience.

Sites in West and East Haven are at different stages in planning and each is distinct in population density, hydrology, types of habitat, and erosion and wave patterns.  Each location has a specific settlement density and habitat typology, and distinctive patterns of hydrology, erosion, and waves. Analysis for the two diverse locations included a range of flexible and integrative approaches to coastal adaptation. Building on previous experiences and findings, the group of landscape architects, regional planners, land use attorneys, economists, and engineers worked closely with municipal staff to create initial design proposals and leverage the products of the Southern Connecticut Regional Framework for Coastal Resilience. This Municipal Resilience Grant award was for the amount of $50,000.

Design and Technical Guide for Resilience in SE CT

Through a process of quantitative economic analysis and qualitative design thinking and outreach with municipal leaders, project leads created a phased project that positions municipalities to achieve viable long-term coastal adaptation strategies. Building on meetings with municipal staff, the project team identified priority areas and refined the selection of particular locations as targets for economic analysis of resiliency options. The benefit of wall building, road raising, tide gates, inland protection and no action, based on the costs and the potential to mitigate storm impacts were evaluated through this project.

The goal of the project was to align the economic analysis and ecological planning with municipal and homeowner interests to create an economic model that can serve as a decision-making support tool. Models were made that predicted sea level rise and storm surge inundation before being used to predict property damage. A design framework was established to prioritize projects based on their ecologic and economic factors.

The final Design and Technical Guide is intended to be a prototype serving as a toolkit for municipal planning. While the East Haven and West Haven coastal resilience redesign is the focus of the document, the thought process presented poses possible design considerations for
a number of future locations.

Robert Mendelsohn – Yale School of Forestry and Professor of Economics 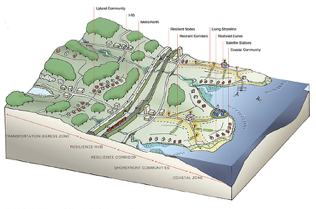 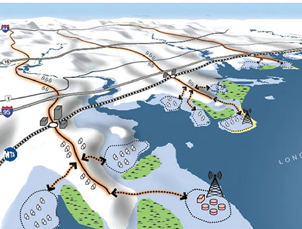