In order to stem the high cost of flooding to home and business owners, the Federal Emergency Management Agency (FEMA) offers flood insurance in communities that comply with basic floodplain management standards through the National Flood Insurance Program.  Communities may choose to enter into the National Flood Insurance Program’s Community Rating System (CRS) in order to reduce the cost of flood insurance premiums for their property owners. Communities participating in the CRS Program go above and beyond the minimum standards and, depending on their level of mitigation efforts, can garner insurance premium reductions from 5-45%.

As a region, Western Connecticut is extremely vulnerable to natural hazards. Many of its most critical assets including public safety, sanitation facilities, transportation corridors, employment centers, and affordable housing are located on or near the coast or the region’s many inland waterways. The Western Connecticut Council of Governments (WCOG) is taking steps through this grant project to create a regional CRS program and specifically assist four municipalities as they take on mitigation efforts to reduce the impacts of coastal and riverine flooding.  WCOG is helping to provide cost savings by performing CRS activities and CRS municipal coordination regionally. The impacts of this effort will provide flood insurance savings for citizens and reduced costs for participating municipalities. This Municipal Resilience Grant award was for the amount of $23,151.

This project focuses on four municipalities, Greenwich, Darien, Norwalk and Danbury. These are communities which are not active in CRS and with the largest totals for flood insurance premiums. Based on 2014 Flood Premiums data, the Regional CRS program estimates $376,934 – 753,868 (Tier 9 or Tier 8, respectively) in savings spread over 4,949 flood policies, annually.  These savings come to about $75 – 150 per policy holder. Figure 5 in the final report lists these savings out by municipality. WestCOG has performed activities to earn CRS credits and to coordinate with municipalities for additional credits to eventually reach these target savings.

There are ten tiers of flood insurance savings in the CRS program which are outlined in Figure 2 of the final report. The Regional CRS Program will provide 600+ CRS credits (Tier 9, 5% savings) for all participating municipalities through WestCOG efforts. Additional credits can be earned for activities performed at the municipal level, which is estimated to provide an additional 500 - 1000 (Tier 8 & Tier 9, 10% & 15% savings respectively) depending on the community and its existing statutes and ordinances.

To achieve the above target savings, a verification process is required where a CRS specialist, working under FEMA, reviews all the documentation proving that the communities are performing the activities which they are claiming CRS credits for. In this capacity WestCOG is coordinating the verification meetings, serving as the point of contact for communities and developed an inventory of documentation. The regional outputs of this program include:

While the four target communities have not yet received CRS status as a result of this grant, they are currently in the FEMA verification process.  This project is intended to continue as a regional service funded under state regional service funds or, in lower capacity, under WestCOG’s transportation program as an effort to document mitigation efforts which impact transportation infrastructure.  By establishing this program, WCOG is helping to reduce flood insurance rates for residents in the participating four communities while serving as a model for other interested communities in their region and throughout Connecticut. 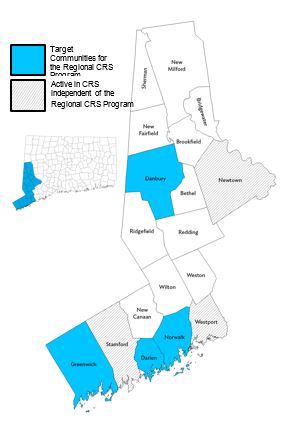 Target Communities for the Regional CRS Program are in Blue